Once again the time has come for the Irish holiday St. Patricks Day to be celebrated. Not only in Ireland but across the world celebrations will be taking place on March 17 th, with different events taking place all over Germany. Berlin will be offering several events during the day open for the public to participate in, in order to acknowledge and enjoy the culture of Ireland. The colour green will be seen in many famous sites both in Germany and worldwide, to bring attention to the day.

St. Patrick's Day is the National Holiday of Ireland and Northern Ireland, characterised by public parades and festivals. It is celebrated in honour of Saint Patrick, a Christian missionary born in the 4th century who is seen as the primary patron saint of Ireland. The day, that started out as a religious celebration in Ireland, has over the years turned into a global celebration of the heritage and culture of the Irish in general. It’s a day for the Irish and other people to come together and celebrate together.

The colour green has historically been associated with Ireland and that is the reason behind many famous buildings across the world being lit up in the colour green to mark the occasion. Over 180 sites have been participating in the campaign called Global Greening which has been arranged by Tourism Ireland for the last six years. Some of the most famous ones have been The Empire State Building in New York, Niagara Falls in North America, the Sacré-Cœur Basilica in Paris, the Allianz Arena in Munich, the Colosseum in Rome, the Sky Tower in Auckland, the Christ the Redeemer statue in Rio, the London Eye and the Great Wall of China. In Berlin, the Berliner Funkturm, the Irish Embassy and numerous pubs will be going green.

One of the events that will be taking place in Berlin is a live act by Murphy’s Law, who will be playing at the Irish Harp on Giesebrechtstraße 15, providing an evening of Irish folk music and dance. Another happening is the St Patrick’s Gaelic Sports Open Day held in Park am Gleisdreieck, where the people of Berlin are invited to try out Gaelic football, coaching and games. Later during the evening there will be a film screening of the Irish film “The Commitments” taking place at the Irish film festival in Berlin called Sheebeen Film Festival, held at Kino Moviemento. 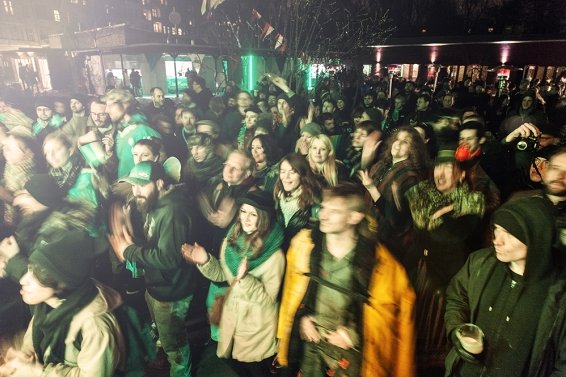